Culture, race and ethnicity and the impact on Occupational Performance

The young, Caucasian occupational therapy (OT) student walked into the clinic of a large urban hospital knowing that the first patient of the day was a 54-year-old African – American man who was a day laborer on the piers. He had recently had hand surgery for a Dupuytren contracture release and needed functional activities to stretch the tendons in the third and fourth fingers of his dominant right hand. She greeted him warmly and then went to the cupboards and pulled out a sand painting kit. She was a technically smart student and knew that pushing the colored sand into the the frame to make a small wall hanging would provide the kind of sustained finger stretching that the patient needed.

Following the session, as the student reflected on the activity, she recalled the little shake of the patient’s head prior to beginning the task and the sardonic little grin he wore as he seemed to indulge her choice on intervention. “I wonder what that was all about?” she thought.

The OT practitioner was on his first home visit to an older woman who had been discharged from the rehabilitation center following a stroke. He was there to evaluate the home, meet the woman’s family, and provide some education about activities of daily living (ADL) techniques. When he arrived, the client introduced the practitioner to her lesbian partner. The practitioner felt uncomfortable in this situation but knew he had to “grin and bear it” and went on to provide the necessary information in a stiff, officious manner.

The young Somali man didn’t seem very friendly. He didn’t shake the hand of the experienced practitioner and seemed to carry an imperious demeanor. Although the OT tried many ways to get him to tell her his story and how he understood his mental illness, he finally stood and said that he didn’t want to talk to her. He would only discuss this with a man. She wrote in his chart that he was noncompliant.

What are the similarities among these stories? They are examples of how issues of culture and ethnicity may impact on OT practice. Issues of culture, race and ethnicity can all be subsumed under the concept of diversity. Being diverse means having “distinct forms and qualities”. (Merriam -Webster, 1995) What is so important about diversity and why should OTs be concerned about these issues? How will knowing about them help one’s practice? Munoz’s statement earlier begins to tell the story. 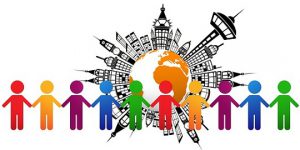 The world is an ever-changing place, with the demographics of the United States indicating an ever-increasing ethnic diversity in rates that surpass any other generation and improving access to technology that connects us to anyplace else in the world. This is now the world of OT. Although health care publications in the areas of culture and diversity have proliferated in the past decade (Black & Wells, 2007; Bonder, Martin, & Miracle, 2002; Latanzi & Purnell, 2006; Srivastava, 2007), a recognition of the need to understand the unique culture of a client was first cites in professional publications in 1968 (Committee on Basic Professional Education, Council on Standards, as cited in Black, 2002). Interestingly, a few of the main reasons that OTs have been concerned about diversity for so long is their belied about the uniqueness of each individual and their emphasis on client-centered practice (Law, Baptiste, & Mills, 1995). Client-centered practice focused on the individual clients with whom we work, attempting to understand their beliefs, values, and dreams in order to collaboratively develop appropriated and meaningful interventions. In order to do well,, OT practitioners must learn about a person’s culture as a means of understanding his or her unique characteristics and how that culture impacts the person’s occupational choices and behaviors.

In the first story earlier, the enthusiastic OT student chose an activity (sand painting) that did achieve the results she wanted (tendon stretching) but had no meaning for the client with whom she was working. As as result, the client would more than likely not repeat this activity outside of the OT clinic. had the student learned a little of this man’s culture and interests, together that may have determined an intervention activity that not only achieved the physical results but would also excite the client in a way that he may choose to repeat if often for its therapeutic and cultural values.