Occupational Therapy has a rich but complicated history. It was initiated in industrial developed countries, in late 19th and early 20th century.

It has been influenced, as all professions have, by world events, personalities, and social movements. Important examples that have influenced the evolution of occupational therapy include industrialization, women’s rights, wars, economic downturns, health care legislation, and the digital age. 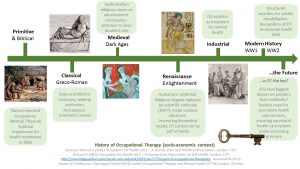